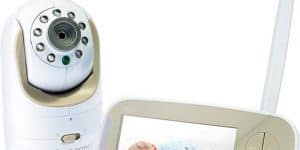 You’re about to find out which is the best 2 camera baby monitor on the market! Save the headache of buying the amount of monitors I have, that eventually all give out. Even if you only have one child, you can use it with just one camera, or get a second for a playroom, or already be prepared when you have a second baby! You buy the monitor with one camera and add a second (or third or fourth!) separately. Yep, up to 4.  Seriously the best.

Ugh.  I haven’t had a bunch of baby video monitors because I love buying them and go on wonderful shopping sprees. They just stop working or aren’t user friendly. My family consists of 3 boys. I have an 11 month old Rhys, he’s my third boy.  My older two sons are Miles who is 5 and Ellis who is 3 and 1/2. Ever since I was pregnant with Ellis (4 years ago), I started researching, and then purchasing video monitors that could have 2 cameras.  A 2 camera baby monitor was and is important to me. I can see the nursery and toddler room simultaneously but only carry around one monitor receiver.

At this point, I think we’ve gone through 4 or 5 different monitors since our very first one when Miles was born. It’s beyond time I share my experience with you all, and tell you the absolutely best one.  Because you’ll save money not having to re-buy the same product 4-5 times like I did.

We started with video monitors from the beginning.  And audio monitors to bring on trips or have as a back up. It’s comforting to be able to see your baby in their room.  Hearing them sleep in the beginning, to seeing what they are up to in their crib later on, and finally to see if they are getting out of their toddler bed after transitioning.

Even now, my two older boys share a room and if one of them has a bad dream or has wet the bed, we know because of the monitor.  Yes, they are old enough to get up and walk to us. Sometimes it’s nice to hear them having a hard time and meet them where they’re at. It’s also super convenient to hear and talk to them through the monitor.  For example, their brotherly interactions while in bed are adorable to hear, but I can also press the microphone and tell them it’s time to stop telling jokes and go to sleep.  At night, I have the monitor set up to switch back and forth between their room and the nursery.

Which Baby Video Monitors Did Not Work?

These are my experiences, but I also have a lot of mom friends and my history is not unique.  Our first video monitor was a Motorola MBP36S wireless video monitor, and it is capable of having multiple cameras.  It worked okay at first, but after a short time- it would always lose the signal and beep obnoxiously.  We lived in a small condo at the time. Even though it claims to cover a 590 feet, we never experienced that to be true.

Since we had already purchased it, we decided to keep trying to make it work.  Like positioning the monitor closer to the room to keep the connection, even though that kind of defeated the purpose of having a baby video monitor in the first place.  Then, it finally gave out- when it started losing its’ charge quickly or not charging at all when plugged in.

Next, we had the Summer Infant Video Monitor.  Which worked fine, until it didn’t.  I replaced the power cord more than once.  Eventually, it stopped turning on completely. Now that I have a camera that works well, I realize it didn’t have that long of a reach either before the connection would get lost.  Finally, my parents got a different monitor to have when we visited.  That one had a terrible image resolution and died within the first year as well.  Even without consistent use.

When I was pregnant with my third, I was super annoyed that I was shopping for a monitor again.  I did tons of research and wanted to get one that would actually last me until I didn’t need a monitor anymore.  I wish I knew about it earlier!

Okay, okay. I’m sure you’re anxious for me to tell you about the monitor I actually LOVE.  After tons of research, we landed on the Infant Optics DXR-8 Video Baby Monitor.  The reviews alone will tell you how amazing this camera is. Now that I’ve had it almost a year,  I want to give you the real mom reasons why this should be your first choice from the beginning. 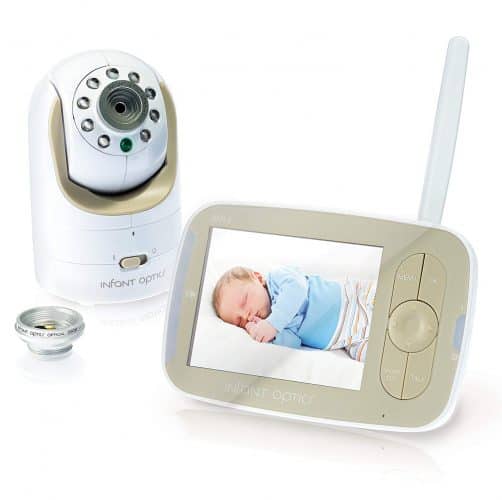 The Infant Optics DX-R Video Baby Monitor initially stands out for a variety of reasons. One feature is that it’s one of very few baby monitors that has an interchangeable lens.  Based on the room size or the position of your camera, you can choose the original lens, a zoom lens or a wide angle (sold separately). The original lens zooms in even without the special zoom lens, and it’s also capable of panning and tilting very far angles either up and down(120 degrees) or side to side (270 degrees).  See my sons’ room below. This is pitch black at night when they are sleeping.  I can span over to each of their beds, depending on who I need to check on. 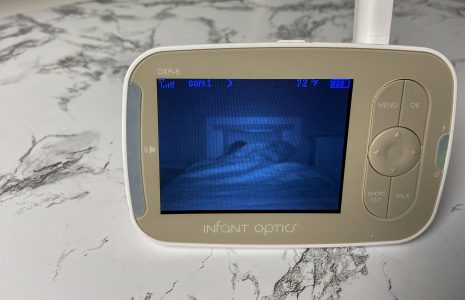 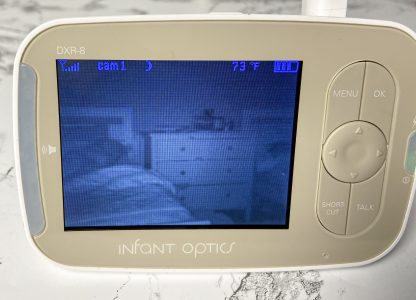 As you can see on the pictures above, the cameras also pick up the temperature in the room. This was so useful for us when we moved into our new house! The air and heating system was not working evenly, but we were able to make sure our boys’ rooms were okay via the monitor reading. 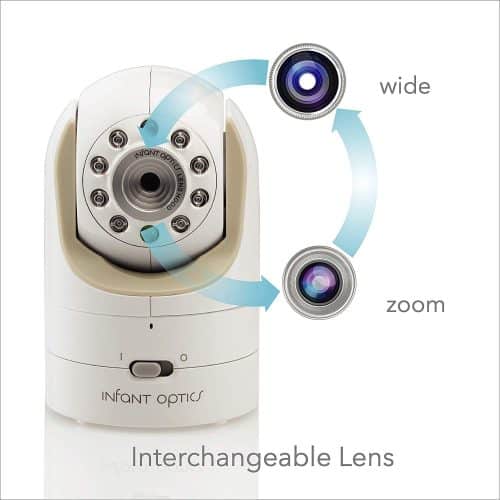 Right now we have two cameras. (The second camera is bought separately) One set up in the shared boys’ room and the other in the nursery. We have contemplated adding a third in the basement.  This baby video monitor can add up to 4 cameras. The boys often play in the basement, while I can’t be there. Either I’m making dinner or doing other things around the house.  Right now the 2 oldest are fine alone, but one day my youngest will start joining them. It will give me peace of mind to peak in on them if I am cooking dinner or other household chores upstairs. 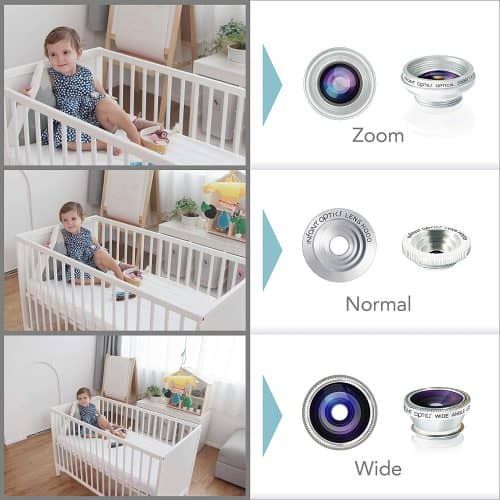 The Infant Optics video monitor has an excellent picture quality.  I can see the rooms clearly and the picture quality at night is great.  My baby Rhys likes to play a little before falling asleep, and sometimes he gets fussy before falling asleep. Lately, he’s been sticking his leg through the crib, and I can see that clearly in the monitor. I’ll go in and help him adjust, while if he was just playing and nothing was wrong, I’d leave him alone. 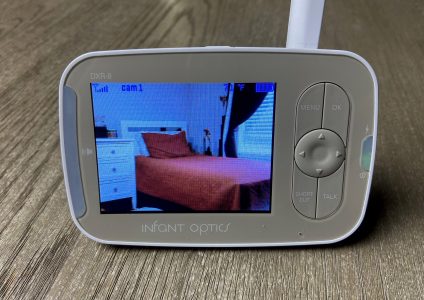 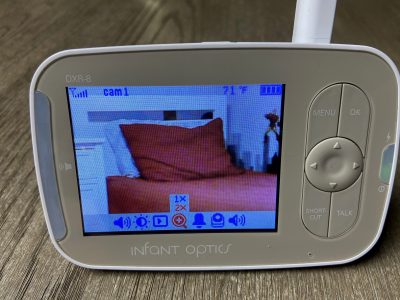 The range has proven to be excellent.  It’s listed as a 700 feet range on the website, but all I know is that I haven’t lost the connection. We live in a 2 story house with a basement.  All the bedrooms are upstairs and my husband and I often watch a movie or hang out in the basement after the boys are all asleep.  The monitor does not lose connection at all, which is super important because I can’t hear the rooms well from the basement at all.  We also have a yard and I can go out there with the older boys while the baby Rhys sleeps.  I’ll put the monitor on the deck while I play with them. It doesn’t lose the connection even though it’s outside of the house!

Many baby monitors have a 2 way communication talking feature, but it’s a feature that has proven to be necessary as babies become toddlers. Young babies will find your voice comforting, giving you a minute to make your way to their room.  Or you can remind toddlers to settle down into sleep. Most times that is all my boys need to hear- I’ll tell them really quickly through the monitor that it’s time to stop talking and get some rest.  Other times, I’ll go in there also- but it works enough that I always use it first.

I usually keep the power cord in our room when I take the monitor downstairs, because I rarely need it to keep the monitor on.  I have it in battery saving mode the majority of the time which is about a 10 hour battery life in power mode or 6 hours when fully displayed. It’s a lifelong rechargeable battery, not anything you have to repurchase. It will make a loud annoying beep before it runs out of battery and turns off. Which is good so you know it’s turning off, even if it’s not in eye sight.

Scan mode switches between the two rooms.  You can’t have both rooms showing at the same time, but I don’t mind this. For that to be possible, you’d have to choose a room to have sound for and the other room to mute.  When it scans, the monitor goes back and forth between seeing and hearing each room. 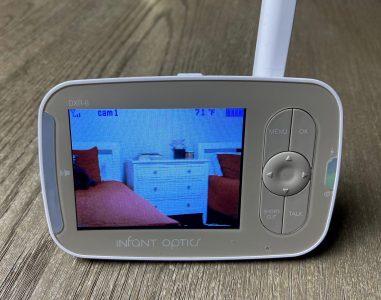 One con that other parents have mentioned is that the monitor only comes with one camera, and you have to buy the second and subsequent cameras separately. The good thing is that it makes a good monitor for people that only want a one camera video baby monitor, it’s not just great for the multiple camera features.  And as your family or needs grow, you can get buy the separate camera units.

Other reviews have mentioned interference with cell phones near by, but I have not had this problem.  This could have been an issue with older models, since I have my phone and the monitor right next to each other on my nightstand every night. It does not use wifi, which means there is no app but I also believe this is why the connection and range are great and remain consistent.

Finally, this isn’t the cheapest 2 camera baby monitor, but it’s also not the most expensive.  It’s exactly what you need. The fancier models have more features, they might be nice to have but you don’t need to spend the money if it’s not in your budget.  And the cheaper models I’ve already described. They tend to break often or have inconsistent performance.  Not worth it when you think how long you’ll use the baby monitor, especially if you have to keep replacing them.

Let me know if you have any other questions in the comments!

One thought on “The Absolute Best 2 Camera Baby Monitor”