Halfway through our very first family photo shoot, Jordan looks at me and says, “Should we just call it? Let’s just put it down as a loss.”  I was right there with him and strongly considered it.  That is how badly our photo shoot went and how overwhelmed we were at the time. We learned some valuable lessons that will help you have a spectacular family photo shoot, by being prepared and having the right mindset.

We booked the shoot initially because we wanted to get some photos of the boys in the sweaters my mom hand knitted for them.  It would be her Christmas gift before the boys outgrew them.  While we were there, why not get some family photos as well? 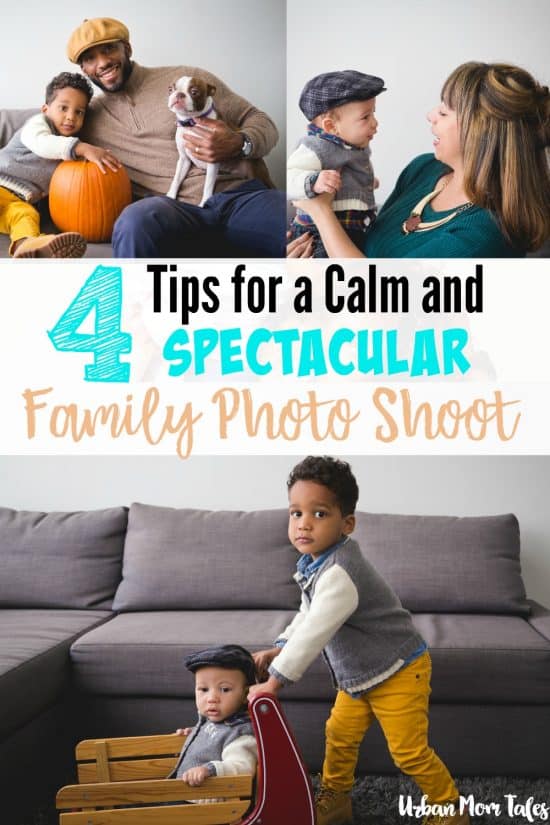 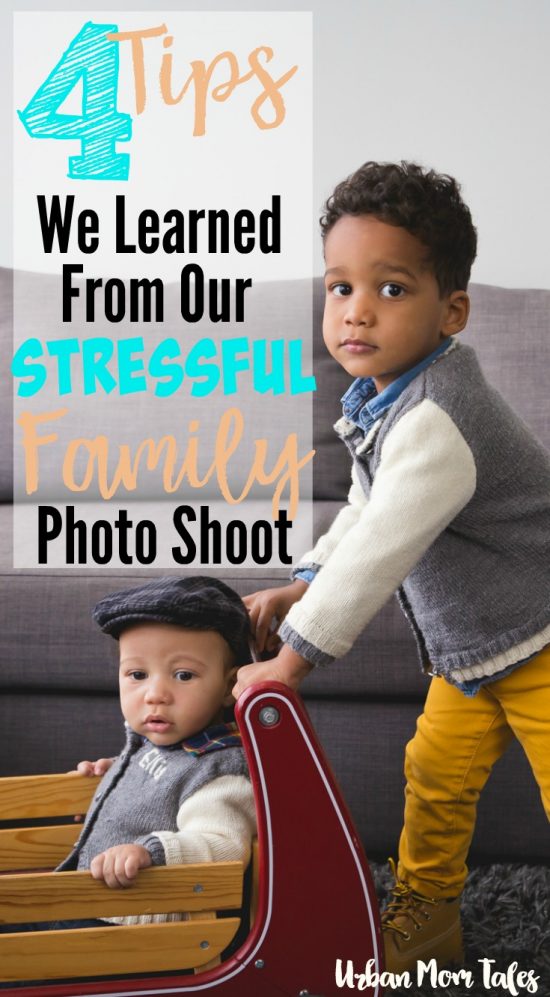 I started looking at Pinterest of course.  I wanted inspiration of things to wear and I started seeing other family photos. You know the ones I’m talking about. The quintessential Fall family photo shoot. The whole family is outside, the weather is perfect, the kids are smiling and well behaved. If there is a dog, he is perfectly posed with the family.  My list of wants suddenly got longer. That was my first mistake.

Tip #1: Look for Inspiration, but be Realistic

We booked it for the end of November in Chicago.  I all of a sudden “had” to have it outside. With a 4 month baby, you are not going to go outside in the cold for pictures.  It was not likely that it would still be warm enough.  I had gotten some good ideas of coordinating colors and what we could wear, and I probably should have stopped there.  (If you have read my posts on Miles birthday theme, you may start seeing a pattern here 🙂 ) Of course the day was too cold and we took the pictures inside.

It’s like the popular quote goes, “Comparison is the Thief of Joy.”  There are many times where I can look at things that I don’t have and be perfectly okay with it.  For example, I can enjoy pictures of a couple travelling in Italy together.  I know that it won’t be me anytime soon.  After experiencing the place through their eyes, I can genuinely enjoy it and not feel bad that it’s not me. That’s a whole other post though! In this social media era, it’s definitely a fine balance.

I should have done the same thing then, look at these amazing pictures- enjoy them and know that it’s OKAY to have something different.

Tip #2:  Be Flexible With Your Expectations

We had a 4 month baby, a toddler that had decided he hates pictures for the past month and a dog. All in a brand new place they’d never been.  Raise your hand if you think we have a recipe for perfection.  I didn’t think so.  And I know this!  I’m not sure what took over my brain.

I thought we could go in there and this photographer would be able to work some magic over my children. I mean, children were his speciality right? He must have some tricks up his sleeve. You know, where both of my young babies would be smiling perfectly, while their sweaters were in perfect alignment with the camera.  Then I could print that picture and have it framed for my mom.  Done and done.  I’ve seen these pictures. There is no way they get accomplished unless some kind of magic or sorcery is involved!

Also, you must make sure your baby does not get his very first cold the night before like Ellis did.  I know! You can’t control those things so that’s when being flexible is even more important! He was happy for the first 20 minutes and then cried for about 50 minutes.  He is usually pretty happy as long as he’s slept and ate, so the cold and him being so unhappy was hard for us to take!

Miles still hated pictures and would run off screaming and throwing a temper tantrum about having to sit with us and take any. This is why he’s not in this picture: 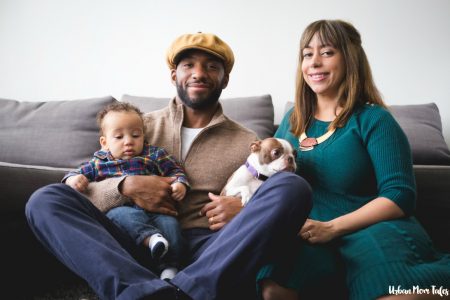 At first, the only way we got pictures of him was through his obsession with this wagon: 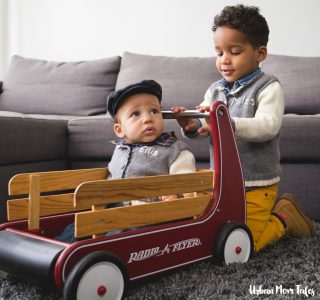 Then there was this pumpkin that he was obsessed with and is awkwardly in the middle of a few shots: 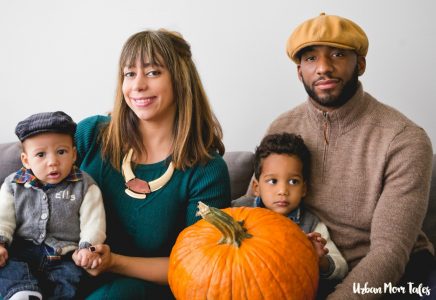 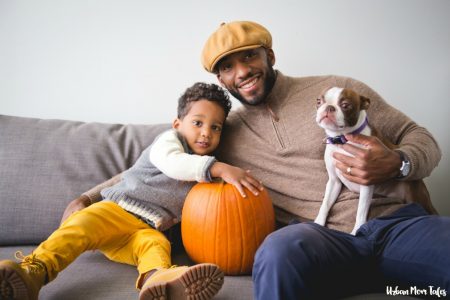 Tip #3:  Be Prepared for Anything

My dog took a shit two minutes after we walked in. Yes, you read that right.  That’s how the shoot began.  We are settling in and putting our stuff down when Jordan says, “Do you smell that? Does one of the kids have a dirty diaper.”  Me: “No, I don’t think so. I just checked.”  We look around and sure enough. There it is.  Right in the middle of the studio floor.  We were horrified! Jordan goes to find paper towels and something to clean it up with, while we both apologize 50 times.

That is probably not a common event.  Some of you don’t have a dog or are smart enough to give her an extra long walk before you take her someplace new.  There are other unfortunate events you may face though. I know we don’t always like to talk about these two evils, but they are very real. Blowouts and Spit Ups.  Trust me.  Your babies will not stop doing these things just because you paid money to get beautiful, perfect ,magazine worthy pictures of them.  Oddly enough, I was prepared for those things and I had an extra set of clothes for everyone. Of course, that is one thing that didn’t happen.

Tip #4: Be Positive. Remember, they are babies!

Half way through, we wanted to leave. We had gotten ZERO pictures of the boys because they were BOTH crying hysterically.  We fed them, bounced them, changed them, coached them and felt worn out.  It was a whirlwind of craziness since the minute we walked in. Why keep torturing them and ourselves? We decided to just stick it out though, just relax and hang out and be okay with whatever we get. That’s when we got some candid shots that I ended up loving. 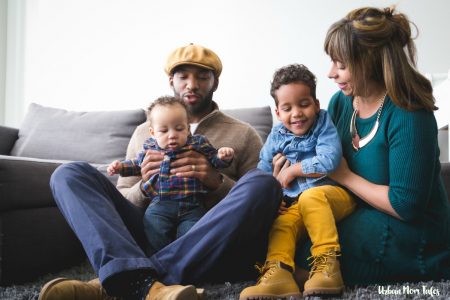 We left feeling defeated though and had very low expectations of what good could come out of that experience.

Guess what though?! I was wrong!  We actually got some great pictures.  They are all over this blog. Our time would have gone so much smoother if we came in with a different mindset.  Not having expectations of EXACTLY what we wanted, but being more flexible.  It’s great to have a plan and be prepared, but there will always be things that you can’t imagine will happen when working with small babies and a nervous dog.

I didn’t get exactly what I imagined, and there was a big chunk of time where we didn’t get ANY pictures. There is actually only one picture where the entire family is looking at the camera and smiling.  That is better than zero! In the end, we captured our family in this moment in time.  What more could you ask for? 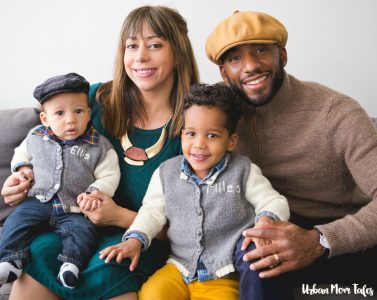 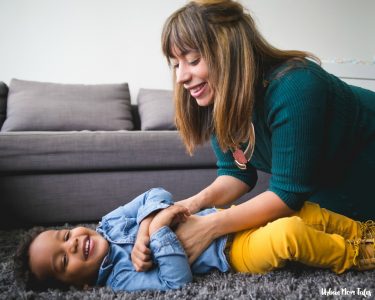 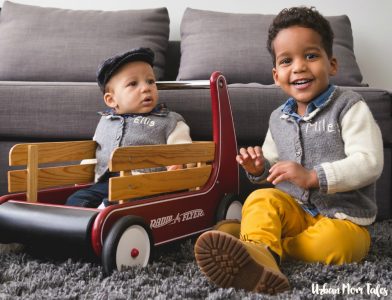 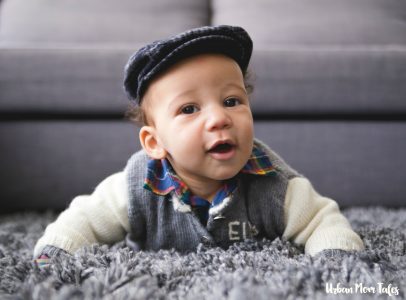