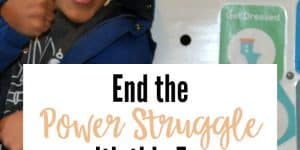 If you find yourself repeating instructions over and over to your toddler or engrossed in power struggles with them- than this daily routine chart is for you! I work on our routine all the time. As babies, I had them on schedules and it worked great. 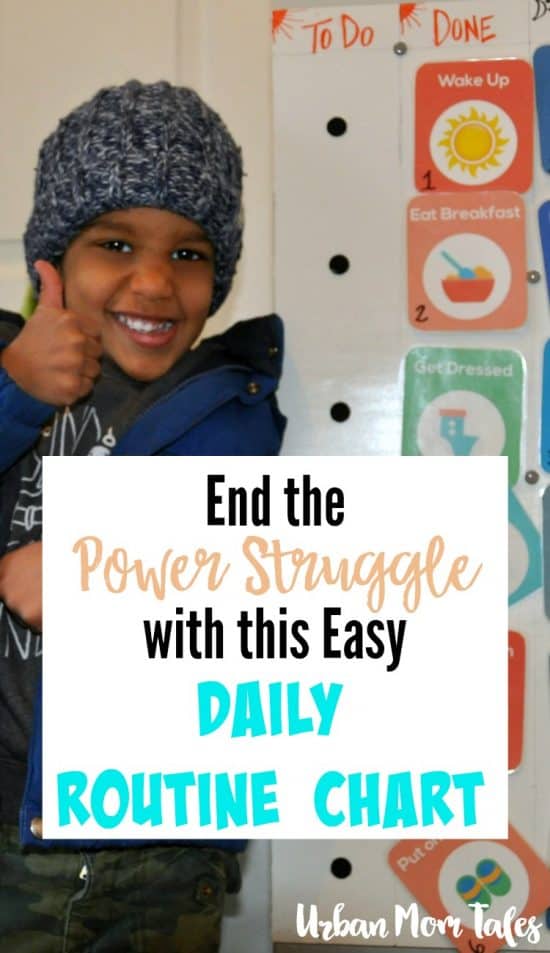 I’m sure you can guess- things change when we hit the 2 year old mark. Toddlers have lots and lots of opinions and emotions they love to express. So while our overall schedule was working well, and we had some positive discipline systems. there were some things that could turn into a battle pretty easily.  All depended on Miles’ (my 3 year old) mood or tiredness level… or if he just felt like it.

Oh man, the mornings! His speed and focus in the morning could easily drive a person to insanity. I really didn’t know it was humanly possible to go that slowly- he would stop and look at an “interesting” spot on the wall for 5 minutes, saying what he thought it looked like instead of putting on his shoes.  This is all typical toddler behavior, but adding a fun new system really helped out. Enter the daily routine charts.

NEW Routine charts have been added to the Urban Mom Tales Shop. Includes 56 cards of different routines, activities and chores to make your own customizable schedule! 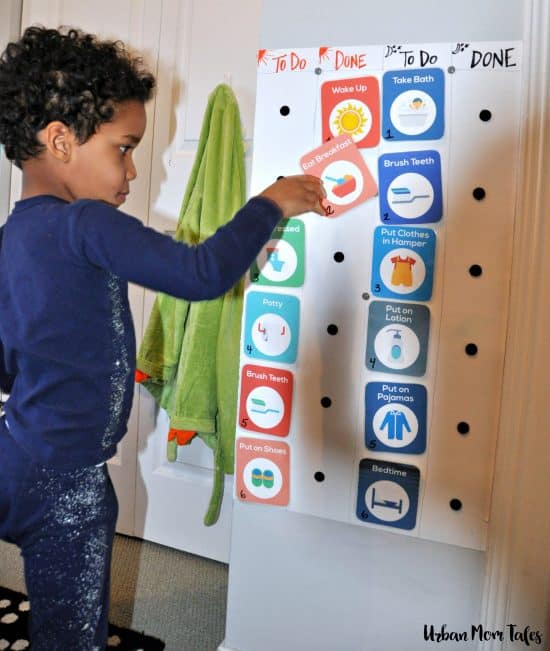 OMG. It’s been a few weeks and they’ve been amazing.

For example, one of our struggles has been Miles putting his plate from dinner in the sink. Sometimes he feels like it and other times he doesn’t.

The other day he left dinner and my husband and I were talking about something.  He had was done eating and we’d sat together for a while so it was fine for him to get up from that stand point.  As Miles settles in with a toy, Jordan says to him- Miles get back here and clean up your plate.

The horror! He throws himself on the floor in his usual tantrum mode. No! I don’t want to!

As you see, putting his plate in the sink is part of his daily routine chart for meal times So I ask him “Did you finish all your cards over here?”. He walked over and it was the very last one. “No, there’s one more.” And looks up at me with this “I know what you’re doing here” look. Haha. Sorry kid- I’ve been at this longer than you.

And it worked! He said “I need to put my plate in the sink and then I can move the last card.” He did it right way.  There is a definite sense of pride when he finishes a set and we make a big deal about it also.

We’ve also been able to add chores that he wasn’t doing consistently before like feeding the dog and setting the table.

There are many ways to go about this! I’ll describe how we set it up and then list another resource at the end to explore other options. 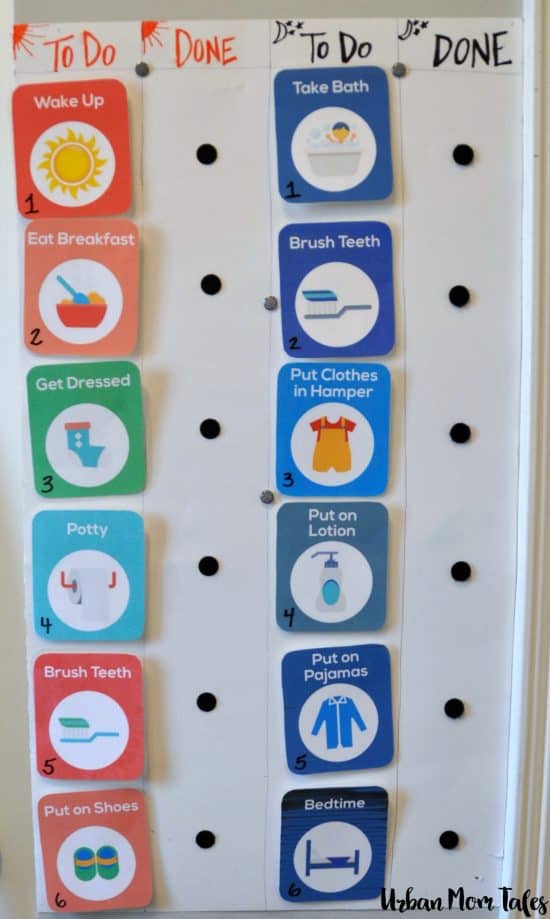 *NEW Routine charts have been added to the Urban Mom Tales Shop. Includes 56 cards of different routines, activities and chores to make your own customizable schedule.

Next was making the charts- the main parts of the day that needed more structure  are morning, bedtime and dinner time. Initially I wanted to do ALL the cards, but they made really long lists and I didn’t want to overwhelm.

At the end, I decided 6 was a good starting point and we could always expand later if necessary.

To assemble: I cut out the cards I needed- laminated them, bought a poster board and velcro dots. Then I arranged them in “To Do” and “Done” columns so he could move each activity after completion. 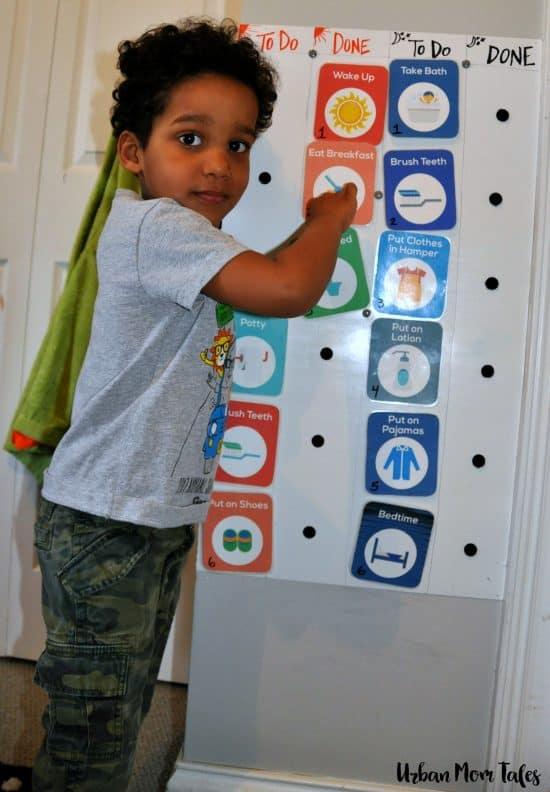 As you can imagine, they have to be taught how to use them so the first couple days are heavy on your end with teaching and coaching.

I set up the posters and told Miles that we would be starting to use these the next day. These are going to help you get ready for school and bedtime and you can do it all by yourself.

The next morning- let’s look at your chart.  You’ve already done the first one “Wake Up”. So take that card and move it to the “Done” column. And so forth. 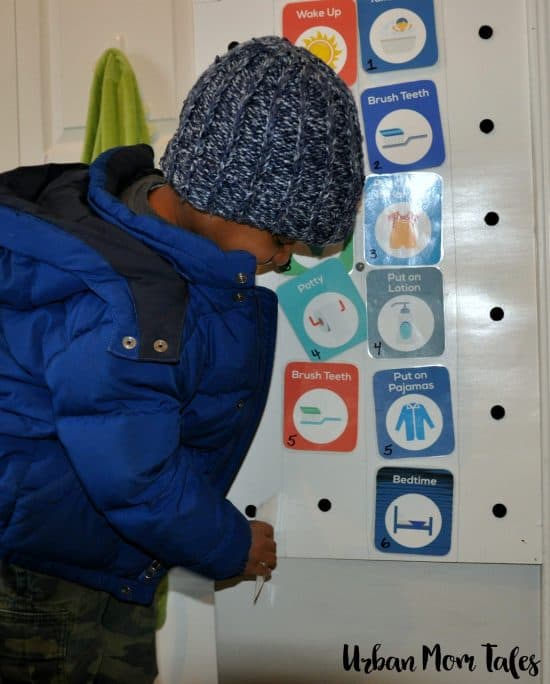 We went through a couple days of coaching and afterward he had it down pat.  Best part is that he loves it! Like truly- he asks if it’s time to do his cards and is excited. I think the velcro dots and actual activity of moving them does help.  He can really visualize himself going through the steps. 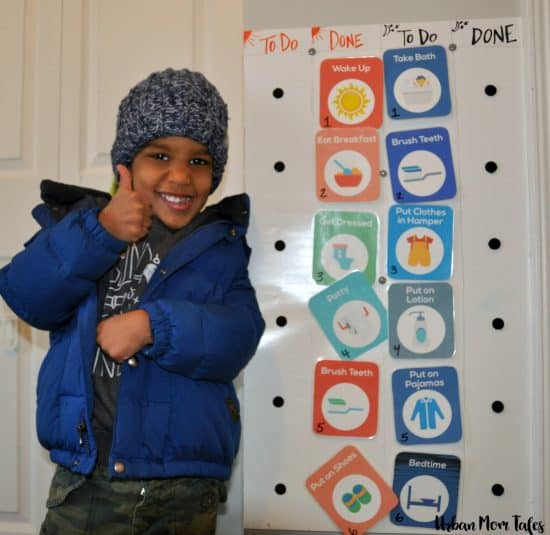 There is still some room for improvement in the speed department for Miles :-), but he is so much more focused. And he rarely fights feeding the dog or setting the table now because he can visually see that it’s part of his duties everyday. 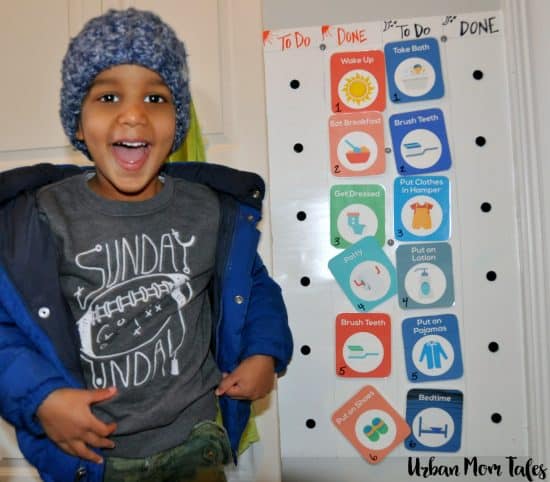 P.S. Baby brother Ellis wanted to make sure that you all knew he was here too. As I took pictures of Miles, he kept saying “cheese!”. 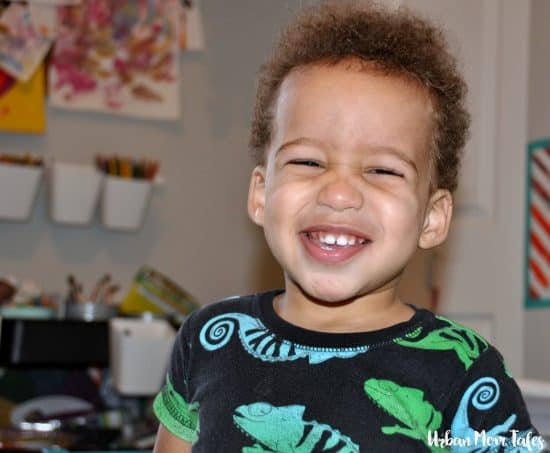