Apparently, a large garbage truck is the most coveted toy amongst toddler boys at the playground.  It can stir big toddler emotions! I personally have never had any inclination to play with anything resembling a garbage truck, but to each their own. 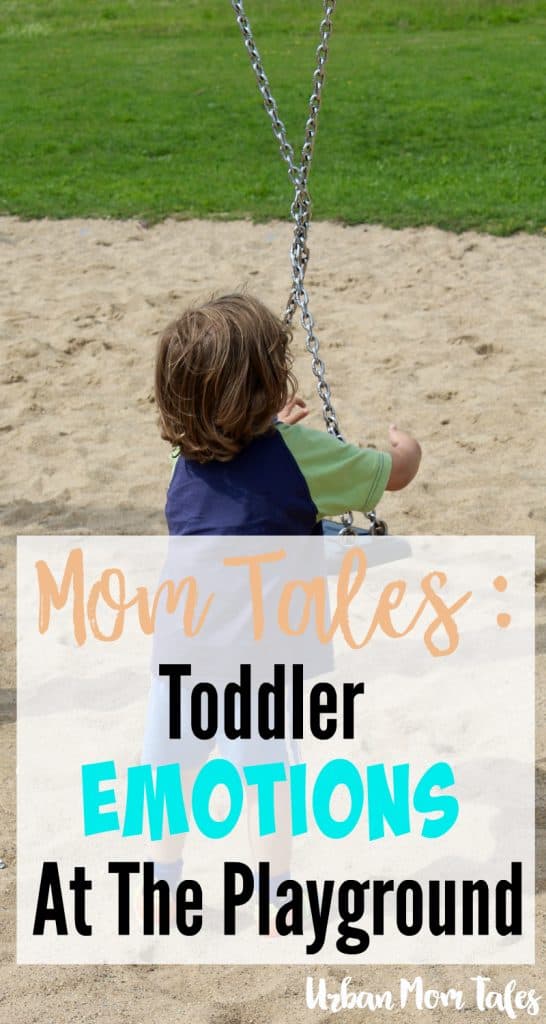 Since it’s winter in Chicago, we’ve gone to a couple of different indoor playspaces. When Miles finds a toy he likes, it’s OVER. Meaning he can play with it for almost an hour if you let him- amazing focus that one.  So we are hanging out at Little Beans where there are slides, little shops to play pretend, lots of cars, basketball hoops and more! This particular day, he wants none of those things.  He’s comfortably on the floor, chillin’, playing with the best garbage truck ever. I snapped a couple pictures of course. 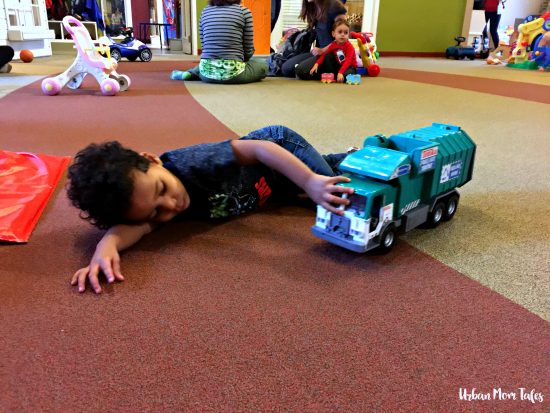 He seems very sweet and sat down close to Miles and just watched and watched him.  He was being patient at first. But as I mentioned Miles stays with a toy forever. Unlike many kids that move on after 10 minutes to something else. When he didn’t let the garbage truck go, Timmy looked around and decided to go play with a little airplane. I’m thinking, okay- he gave up.  Well, not quite.

He flew it with the most amazing sound effects right by Miles’ face. So of course Miles looks up and interacts with Timmy and the plane.  He took his hands off the garbage truck for a second and BAM!  Timmy saw his window, snatched the garbage truck and ran off!  Oh the horror!  Don’t tell Miles this, but I applaud Timmy’s tactics- he did not steal it from him, push him or anything.  He successfully manipulated his way to the toy.

Miles instantly gave me this look

Heartbreaking! Then he points to the boy running off with his precious garbage truck. So of course, I yell across the place “Hey Little Punk, give him that back right now!”  Kidding!  I’m not going to yell at other children!  But in the moment I didn’t know what to do.  Miles is a sweet, gentle boy at heart.  (I’m putting that in writing so when he starts yelling at me in a year or couple months- I’ll remember 🙂 )

I also know he won’t have me next year at preschool, where grade school recess will try to crush his sweetness and he’ll have to defend himself.  I know- drama queen. So I said,

So Timmy said sorry and gave it right back. Hah! If you believed that, you haven’t played with toddlers very much.  Lol.  Why does this matter?  As we observe Miles’ personality forming, as parents we naturally want him to be the best version of himself right? It’s a reoccurring theme that we have seen, and I want him to learn to stand his ground.  For example, this summer at the park, another boy walked off with Miles’ blue car and he kind of let him.  Another time he was going inside a bounce house and a boy blocked the entrance and told him he couldn’t go in. Initially, Miles started to back up and walk away.  Of course I walked up behind Miles and gave him an extra push right past him in the bounce house.

It’s quite amazing watching their little personalities form and seeing how they respond to all these events.  It’s also terrifying! Is that just me? And I am going to do it all over again with Ellis! You don’t want them to bite or push but you definitely don’t want them to be bit or pushed around either.

Eventually, we left the glorious garbage truck and moved on to play with a train set (most things with wheels do the trick).  I don’t want to just distract him with a new toy when he gets upset, but try and help him. I don’t want him to steal from others, but know that it’s okay to tell someone you weren’t done.  But then he also has to share.  So many things!

How am I going to do all that?

No clue! Hope you weren’t here for answers.  Right now I just try to empathize with his feelings, give him a hug and some love.  And honestly, try and remember one of those catchy songs from Daniel Tiger.  Yes, I’m learning parenting tips from an animated tiger.

What is your “favorite” emotional toddler story?

2 thoughts on “Mom Tales: Toddler Emotions at the Playground”