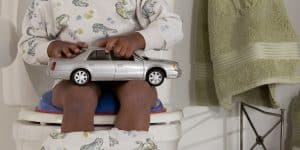 Potty training isn’t something that happened quickly or seamlessly at our home.  So this isn’t a post about how to potty train in 3 days.  We definitely had our successes and I’ll share how we accomplished those.  But ultimately, we went through a year where my oldest son was fully potty trained for pee, but not poop.   After seeing endless posts from other moms going through the same thing, I realized it wasn’t unique to him. This is our experience and how we ultimately tackled potty training for poop. 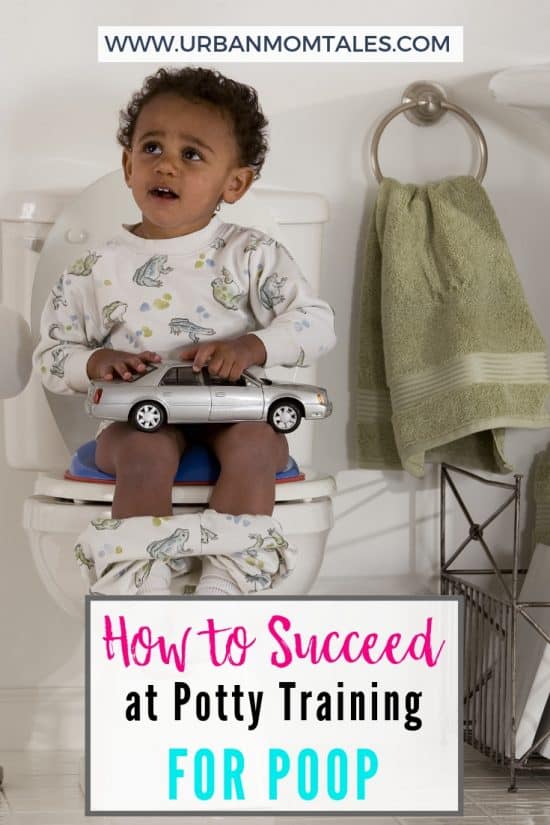 We started potty training Miles when he was 2.5 years old.  I thought about doing it earlier, started researching when he was about 20 months, but his baby brother was born when he was 22 months.  Between the new baby and working full time and general life “hecticness”, I pushed it off until things calmed down.

The method we used is the one highlighted in Oh Crap! Potty Training. Even though she suggests potty training between 20 and 30 months, we used the rest of her methods (we started at the end of this window).  I highly recommend this book- it is knowledgeable, easy to follow and she has a whole chapter on poop. She gets it.

These are some of the methods and philosophies from the book.

The small potty is to foster independence. For potty training on the go. This Kalencom Potette travel potty is EVERYTHING. We used it in addition to our small potty at home.  Miles was also scared of big toilets and public bathrooms.  So this added security and ease to going outside of our home.  They can be put on top of big toilets as a seat or on the floor by itself.  Best thing is that- It doesn’t move around on top of the toilet! Which, as you can imagine, is pretty scary to a toddler already hesitant of the whole experience.

Some Reasons they Won’t go Poop

First things first. Eliminate any medical reasons like constipation or other physical things that could be making it hard for your toddler to poop.

Personality seems to play a huge role in having issues with going poop in the potty. My oldest son Miles is a more cautious kid- at age 2 especially. He needed to warm up to new things and was generally skeptical of new situations or places.  I would also describe him as anxious, even though he’s let go of that as he’s gotten older. Pooping in a diaper is something they are used to.  Even though it sounds gross, it’s a comfort to them because it’s all they’ve ever known.

My second son Ellis just got potty trained at 2.5  He has no issues going poop in the potty. Some hesitation the first couple of days, but then was over it. But he’s also not very particular or attached to anything.  He also has a role model to look up to and learn from in his older brother.  Both of those things probably helped him a lot.  The only reason he took more than a couple weeks, was because I didn’t necessarily want to handle his accidents in public.

That’s real talk. Many times, our hesitation as parents is the reason our child isn’t being completely successful.  One day- I said to myself that is enough. Follow this through, regardless if you have to change his clothes multiple times while out.  He did amazing!  That is what made me realize that my fears were internal, not something he had shown me to be true. I can’t blame everything on being pregnant, but I was 7 months pregnant and exhausted. So there’s that. 🙂

Other reasons they may be hesitant to poop is fear- feels like part of their body is falling out into this dark pit.  Sounds dramatic, but aren’t most 2 year old feelings? Also, they could need privacy. Which goes against our natural inclination as we teach our kids something new.  We are standing over them, coaching, helping them learn when to sit on the potty and wipe- etc etc. But for pooping, it can be best to back up a bit and give your child space.

You’ll know that your child is having hesitation around poop after they are completely potty trained for pee, but wait for their diaper/pull up during sleep to go poop.  Or they ask you for a diaper when they need to go.

At this point, you need some extra intervention and support for your child around this phase.  We tried with my son Miles to just take away the pull up completely, but then he started holding it which was scary in itself.  I wish I had looked into it earlier, but when we finally committed to getting him fully potty trained- we used all these incentives simultaneously.

Miles had been potty trained for so long that he wasn’t using the small potty anymore.  He was going pee in the bathroom on the regular toilet.  But he would always wait until he was in his room alone to poop.  So I brought the small potty back out again and put it in his room. I urged him to sit on it before bed with a few books in hand and left the room.

After we had been reading the books listed below for a while, he was mentally prepared to try again.  The small potty in his room was a golden part to our success.  He was able to transition to the bigger toilet easily from there.  It was just the hurdle of actually going somewhere besides the diaper that needed to be overcome.

We started talking about poop a lot.  It’s not something that I talk about regularly.  I grew up in a pretty modest and quiet household and it’s just not something we did.  But Miles needed it to be an open, easily talked about experience. He needed to hear that it was something not scary that mommy and daddy did also.

Then we read a couple of books that were perfect.  It showed him that he wasn’t the only little boy scared of pooping in the potty and it could be overcome.  These were suggested to me by a friend that went through a similar experience and I was soo grateful!

Play up the superhero part if that interests your child.  We made a big deal about being able to become a super pooper. “Super Pooper” ,“Bloop, Bloop! Goes the Poop” and “Where’s the Poop?” were our favorites.

Related Post: How to Positively Discipline your Two Year Old

Depending on age and personality, a reward system may be an essential addition to finally potty training for poop. We used a sticker chart and got him a super pooper cape and small toy after he pooped in the potty for two weeks straight.  Miles was very aware of the amount of stickers he had and was quick to remind us when he was due for another.  It was very motivating for him. After the first few weeks of success, it was a habit and we gradually stopped doing the stickers.

Reading books, giving privacy, creating a comfortable space, praise and a reward system for action are all great methods to achieve potty training success. Committing to the process is the most important.  It may take longer than you want, but when we start things and then stop to start again later- it confuses our kids even more.  Then it may be even harder to overcome this hurdle.

If it’s been a while since you started the initial potty training journey, you already know it’s hard. But mentally preparing that this is it. This is when they will learn helps to see it through.

At the same time, I must add that not all kids are the same.  Maybe your child isn’t ready.  If they are still showing a strong resistance, maybe slow down.  Just read the books for a while, before you actually start the process of trying. Listen to your child’s cues and proceed at the pace you think is best.

Good luck! I PROMISE it really does happen. They do become fully potty trained. For all of it. 🙂