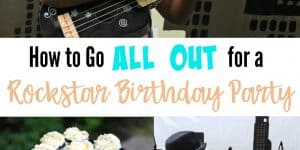 If you have an avid music lover like I do, a rockstar party could be the perfect theme for your next birthday! It’s been almost 2 months since Miles’ 3rd birthday party. So it’s about time that I told you guys all about how to put together an amazing rockstar birthday party. 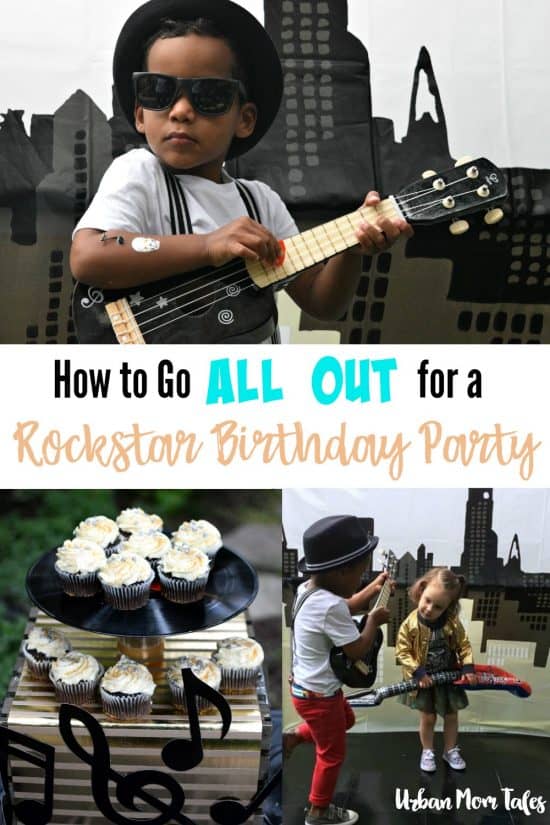 Miles took the lead on some of the party planning  since he was turning three, and has opinions now. It’s a good and bad thing, lol. He’s been really into music, Bruno Mars and playing guitar so it seemed like the natural theme to go with. The biggest projects were putting together a stage for the kids to perform on and gathering all the instruments we had. The most unexpected but best part was how the kids were dressed up in their best rockstar gear- they were all sooo cute! Miles took his role VERY seriously and barely broke out of his rockstar persona. 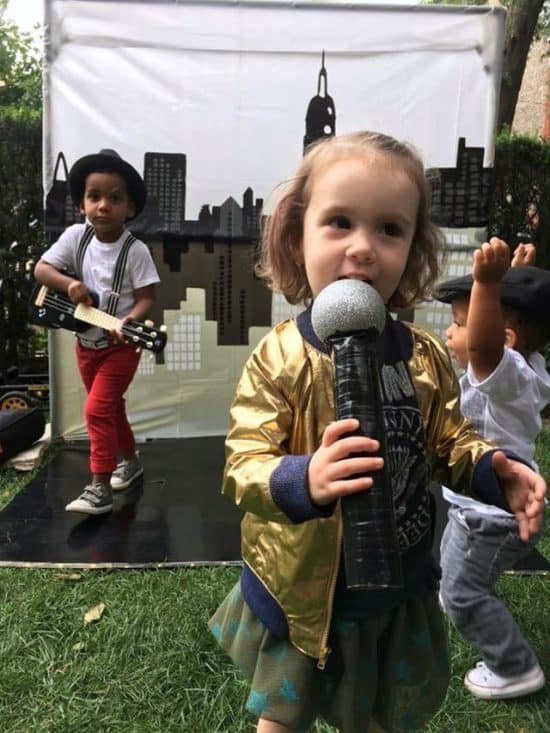 Before we go any further, all of these pictures were taken by Pinky Promise Pix.  I’ve taken my own photos at parties, but with all the setup and everything going on- it’s hard to get good shots and remember to keep taking them.  If you are in the Chicagoland area, I highly recommend Pinky Promise Pix for your next event or family photos! And if you aren’t in this area, consider hiring a photographer or assigning family and friends the task of capturing the event.

In this post I’ll explain everything we did and you’ll get to see the party in full effect, with all of the craziness and adorable little rockstars everywhere.

My philosophy on birthday parties is- do what YOU want!  I love putting together a theme like the ball theme for Miles’ second birthday and doing DIY projects for Ellis’ first birthday Wild Things Party.  I don’t like to spend tons of money, nor do I like to do invitations or goody bags for toddlers.  If you want to spend tons of money (as long as its’ not on a credit card- can’t tell you to do that, lol) or have an intimate family night- as with everything in mommyhood, do what works for you.  Don’t let outside pressures dictate your choices.  Okay- I’m getting off my soapbox- let’s talk details!

First thing is to decide where to have it.  We had it at our house because Chicago venues are super expensive, and we had it outside because our condo is a bit small for the amount of people. So we worked with what we had. The Wild Things party was perfect outdoors, but the rockstar theme would actually be pretty cool inside because you could play with lighting and other things.  Next you need to pick a color scheme that you work everything around.  Ours was black with gold and silver accents.

Next is decide on a menu- this can be a big budget killer if not careful.  For Miles’ second birthday- I got some food catered because I was working full time and had a 2 month baby and just couldn’t handle the task at the time.  For both of my boys’ parties this year- budget was more of the goal so I made finger foods.  The parties were also outside- so no sit down table. Think about your budget and your space and any other details you want- like having food that matches your theme.

This post contains affiliate links for your convenience, meaning I will make a small commission at no additional cost to you! 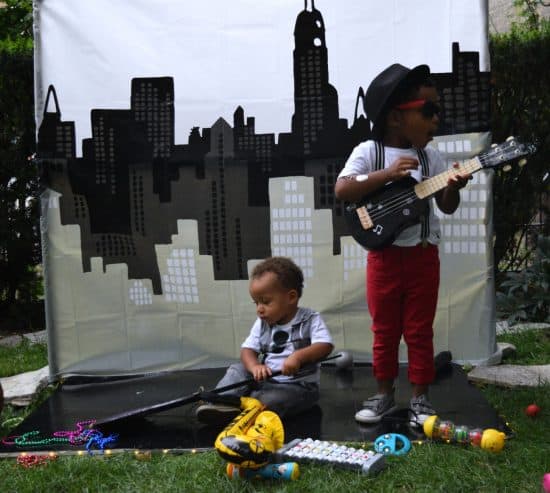 This was a lot of fun!  Very much worth the time it took to put it together. I plan on putting it back up when we move to a house with a playroom.  The backdrop is also a perfect photo booth background  and can be used for future parties.

I followed this tutorial on making the background frame.  The only thing I did different is make it 5ft by 5ft, since the pipe comes in 10ft so I can cut it evenly. The PVC pipe is cheap at $10 and you need to find a nice person at Home Depot to cut it for you- they do it for free.  At first, I was first told they don’t cut it anymore, but I walked around the store until I found someone that would. Ha!

Originally, I considered silver and gold foil curtains for the background. It may have worked for a different setting, but it just didn’t seem right.  Many people have used sheets or curtains and I looked at all of them at Target.  They were kind of expensive and not really the kind of background I wanted.  Then I found the shower curtains!  This city scape was a $12 shower curtain from Target and the dimensions were perfect.  I used tape and clothespins to wrap it up around the PVC frame.

The actual stage.  I’m going to tell you what I ended up using and what my other ideas were so you can have options!  My son Ellis has this foam playmat in his room. I turned it upside down and stuck these black vinyl linoleum tiles on it ($13 when bought).  The edges that didn’t quite fit were easy to cut.  After the party, I just flipped it back over and put it back in his room! The only downside is that the foam playmat was adjustable before and now it’s not. But that’s okay for me- now it’s reversible and I have some extra pieces for a smaller mat.

I also considered a piece of plywood (1 inch, 4ft by 8ft- $13)  cut down from Home Depot to 4ft by 5ft. I ran out of time, and I would need to paint it black, and I also didn’t have a truck to bring home in one piece. Other options are using an area rug, buying a stage, or making one out of a couple of pallet boards.

Final detail is putting string lights around the edge of the stage.  Looked way better inside where it was darker- but added a fun stage lighting effect. 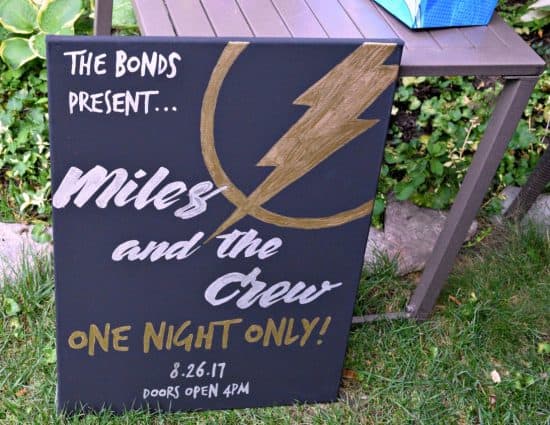 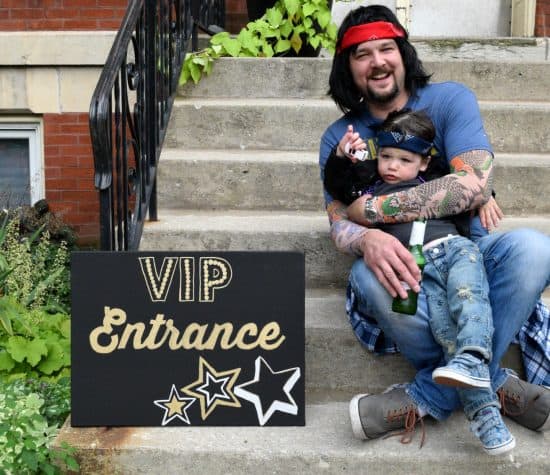 Posters! “VIP Entrance” and “Miles and the Crew” Band poster were made from canvas prints bought at Michael’s and some paint markers.  I used this technique that I’ve used before to print it out and transfer- my free hand is not reliable! You can also print them out somewhere on poster board.  I’ve seen VIP badges made for other rockstar parties that are also super adorable! 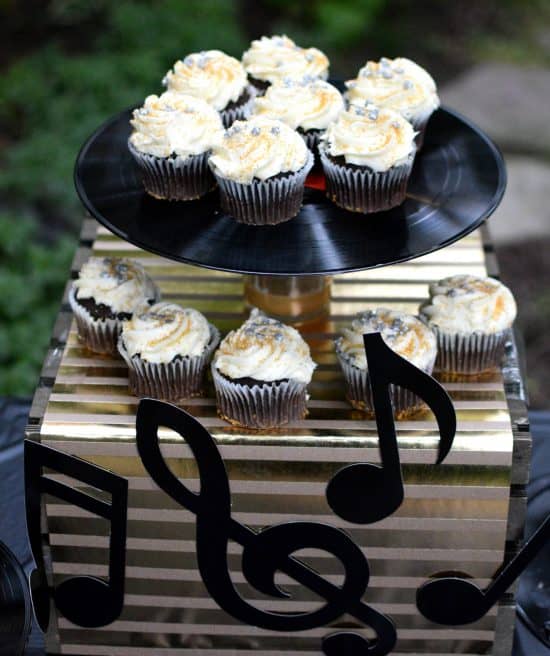 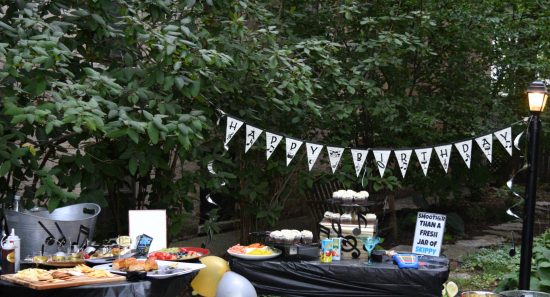 Other decor was a Happy Birthday sign bought on Etsy that was printed on sheet music.  This was actually from Miles’ first birthday so it was a reuse!  Lots of music notes decorated the tables and hung around the space.  Lastly, I got a pack of records at a thrift store and glued them on to candle holders or set them on the table directly as food trays. 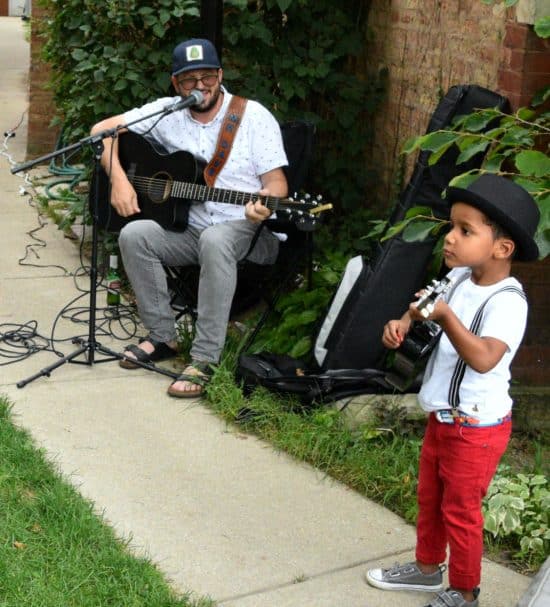 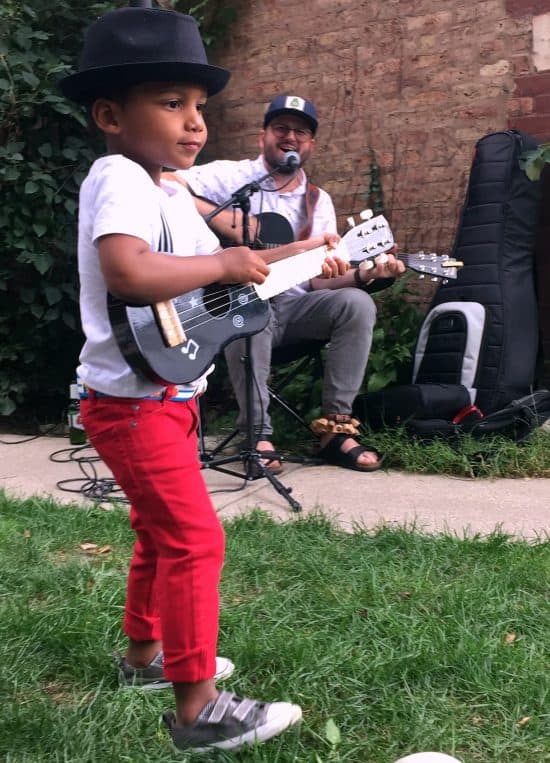 There weren’t too many planned activities. I mean I already made a stage, so there was that. 🙂 My parents gifted Miles a performance from Mr. Dave, whose music classes we frequently attend.  I am not including this in the budget, because hiring out music isn’t always budget friendly.  I had told them we had absolutely no room for toys, so this was a good gift alternative for them.  If you have any friends or family that plays an instrument or sings- it would be great to have that at a rockstar party! If not, no worries.  Just set up your speakers and create a great spotify playlist. 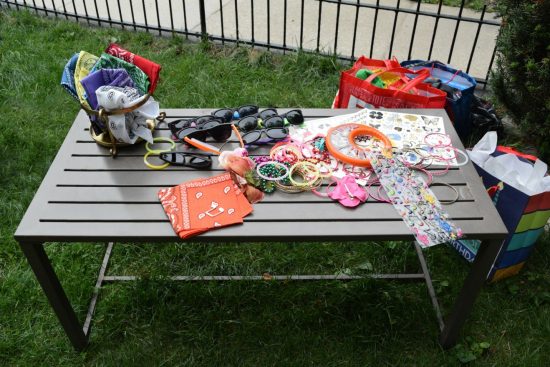 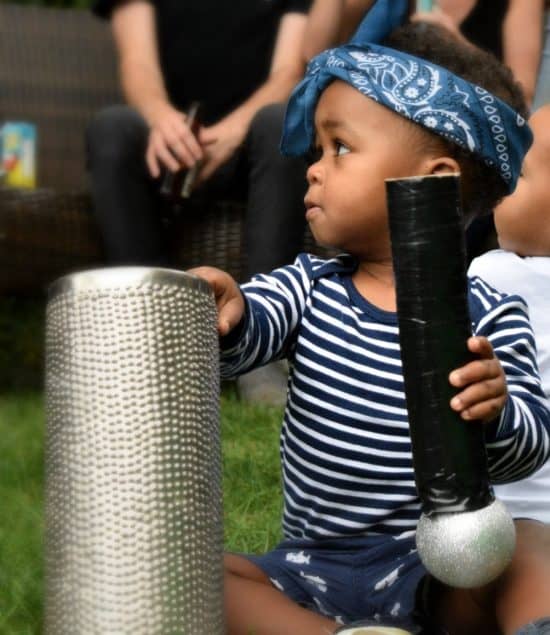 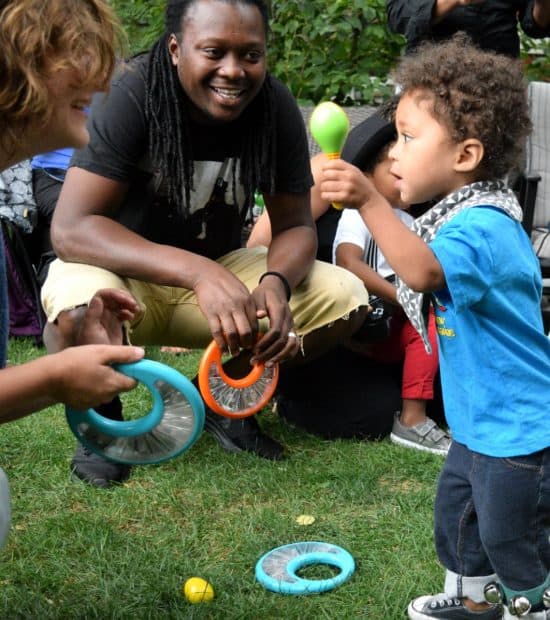 Other items we included were a dress up table and a bin full of all the instruments I could find (we owned a lot already).  Both were essential in creating little rockstars for the party. A lot of people came dressed up already!  But others definitely used some of the accessories. This is everything I bought (a couple things I found at Dollar Tree): 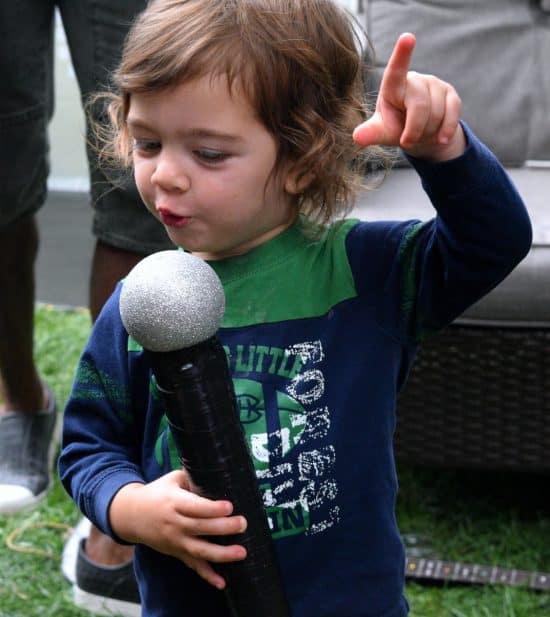 These microphones were super easy to make! Just save a few paper towel rolls and dig out some silver Christmas ornaments.  I just wrapped the roll in electrical tape- bought for a $1 at Dollar Tree.  Added a little bit of glue at the top to secure the ornament down. 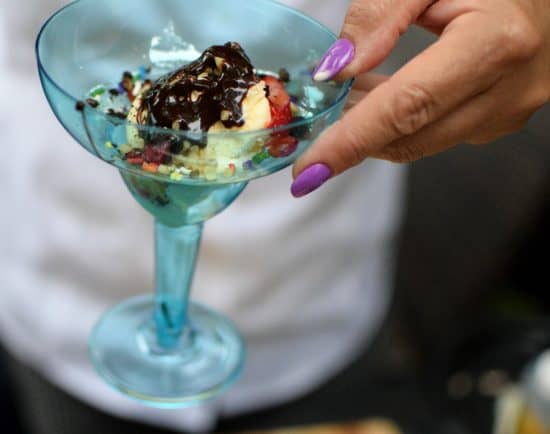 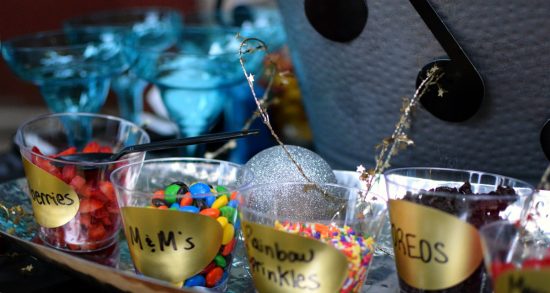 The most exciting part of the food was the dessert.  I got some cupcakes from our local grocery store, but Miles is passionate about ice cream so I put together a sundae bar.  The glasses were actually margarita glasses that I bought years ago for my friend’s bachelorette party and never used.  So glad I kept them! In retrospect, I probably didn’t need the cupcakes. It just seemed like I needed to buy them because it was a birthday. 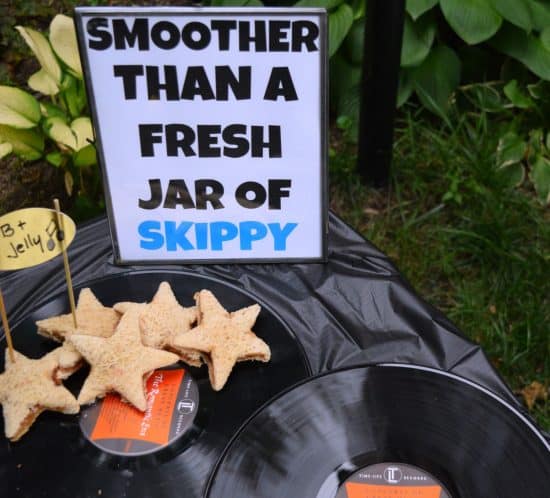 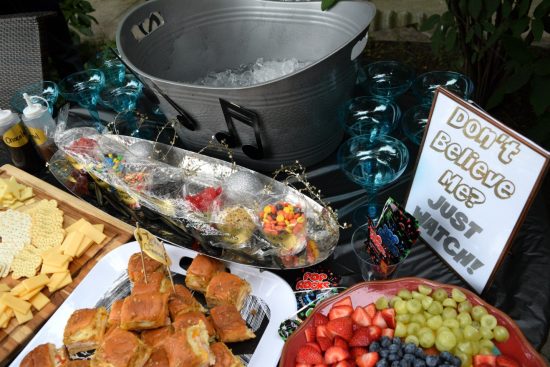 The only real “themed” food I did was star shaped peanut butter and jelly sandwiches and have some pop rocks.  The quotes on the table are from Bruno Mars songs that Miles always says.

Other food served were turkey sliders and tomato mozzarella sliders.  Cut fruit, a cheese plate and a vegetable plate rounded out the dishes. All plates and napkins were from Dollar Tree- I realized last year that I was spending way too much at Party City!

These little rockstars were amazing! I may consider always having parties where people have to come dressed up! 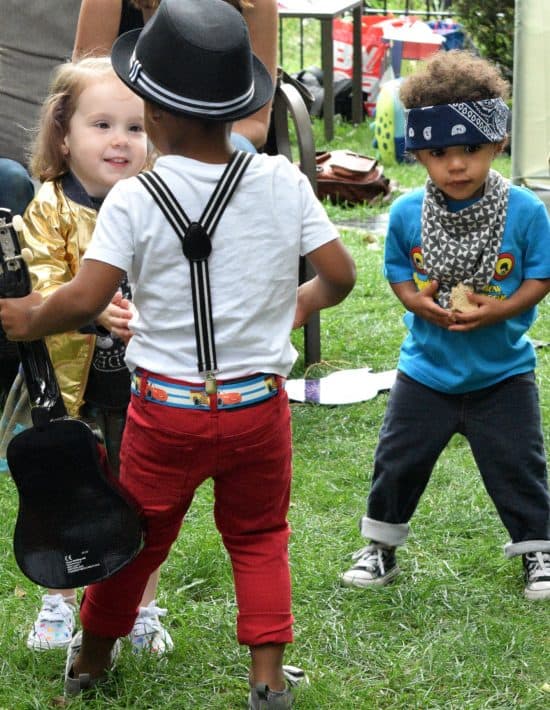 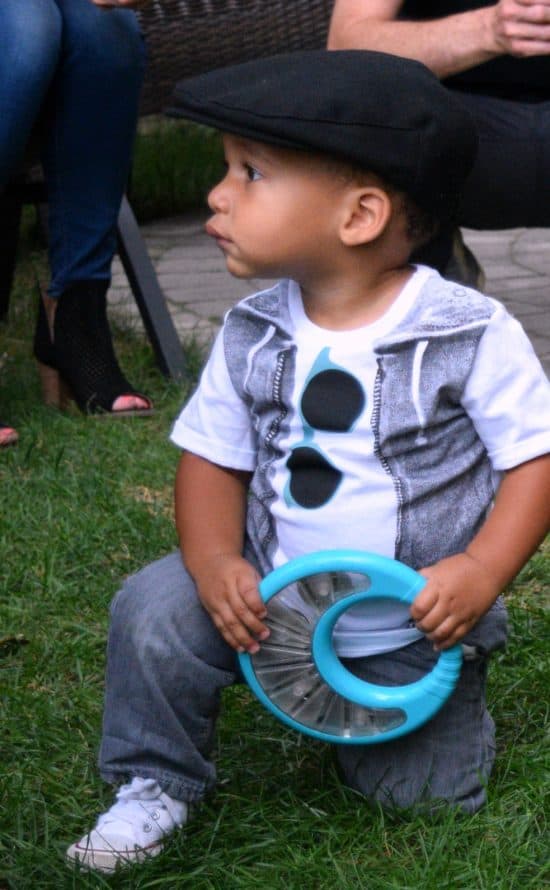 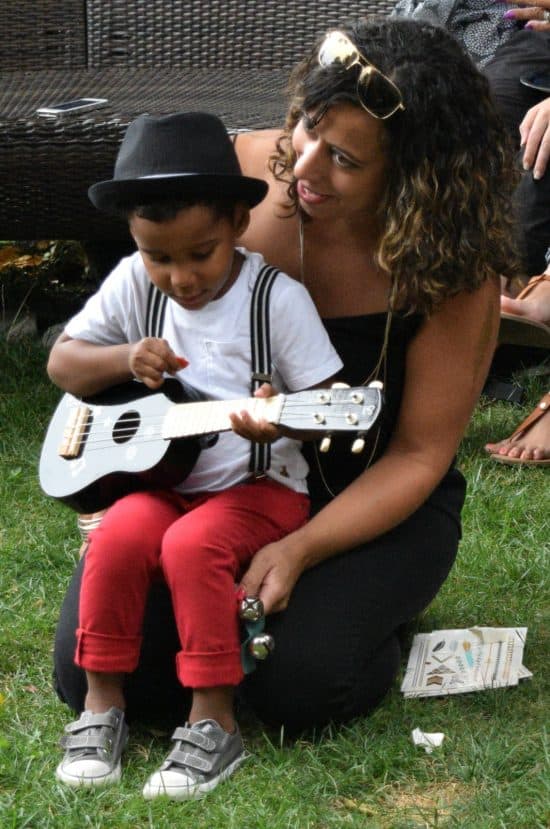 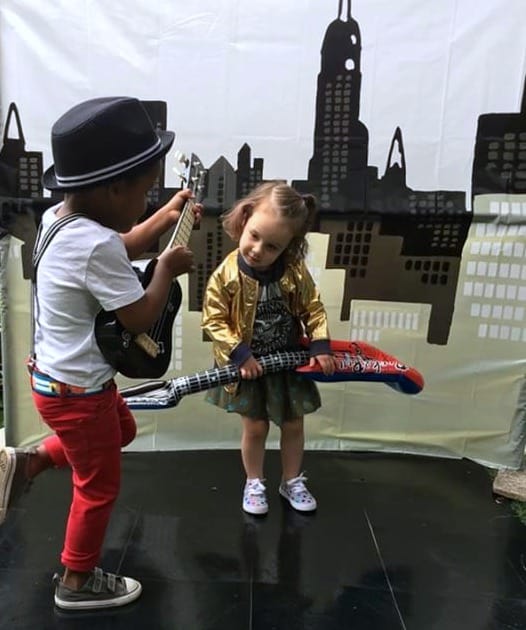 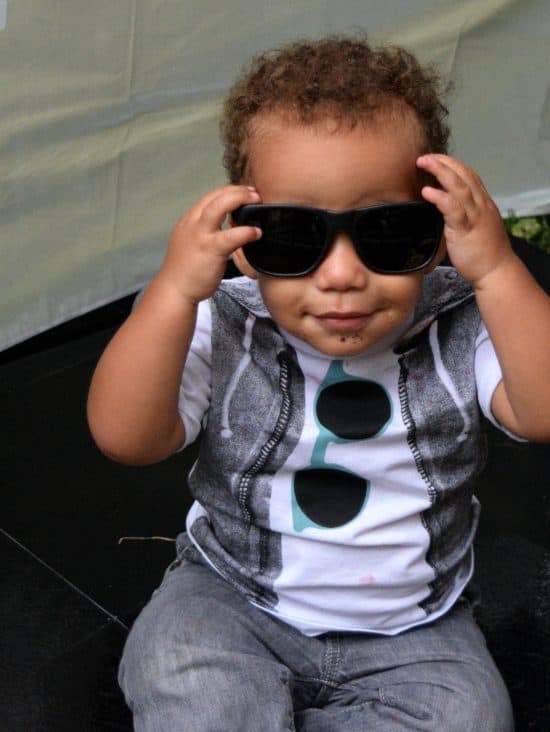 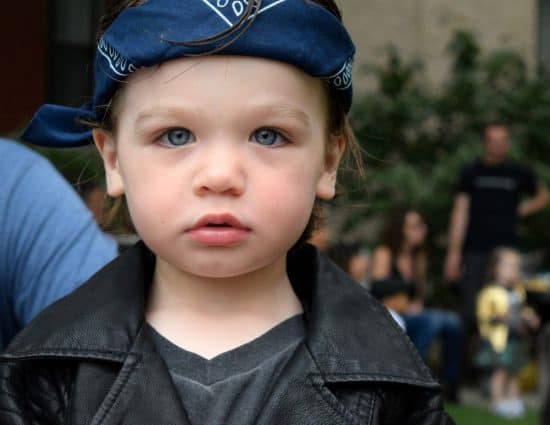 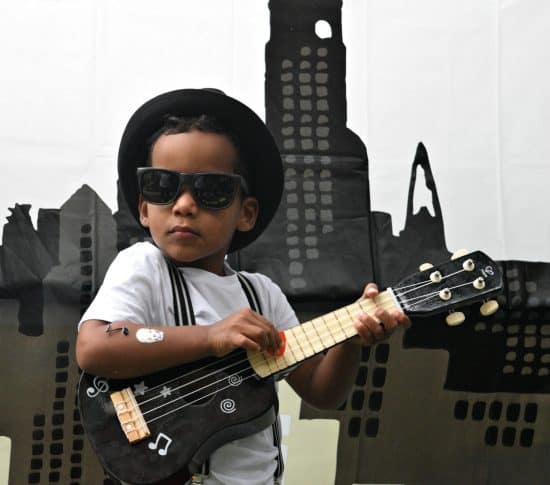 Enjoy your birthday party! Just have fun with it. 😉

Use these checklists to plan your best party yet!

Subscribe (free!) to my newsletter with 23K+ moms and get parenting resources PLUS instant access to my resource library with ALL of my other free files and printables (including these birthday party checklists)! Once subscribed, I will send you a newsletter with all the details.