There are some aspects of my third pregnancy that have been pretty magical, especially my oldest being aware of what’s happening. And then there are some symptoms that are still incredibly real and heightened miserably- especially with two toddlers running around.

As I write this, I’m entering my second trimester and already feeling the symptoms of the first trimester fade away.  Thank goodness. I feel very optimistic of what’s ahead. This post is purely a capture of everything I have experienced and felt so far in this journey- not just physical changes but also feelings on finding out the gender of our third baby.

When I was pregnant with my second son Ellis, my first son Miles was 22 months. He was unimpressed, lol.  The whole idea was just over his head at that age.  This time around, he just turned 4 and is so adorable. He understands that we are expecting a new baby and says things like, “I can’t wait to meet him!”,  “So when the baby is done growing in your belly, he’ll be born and then grow bigger like Ellis and I?” and also some wonderings, “When you eat then, you share your food with the baby?”

It’s pretty special to share this experience with one of your children and have him actually take interest in our growing family and ask such thoughtful questions. Ellis on the other hand is 2 and said, “I don’t want to be a big brother, I want to be Ellis!” That response is soo him.  He will be almost 3 when the baby comes and is a really loving kid so I’m sure he’ll be enamored as well.  The abstract concept will probably not connect with him though until he meets the new addition.

You know what to Expect

This isn’t my first rodeo.  There is peace in having experience. That can’t be denied. I don’t constantly research every feeling or symptom.  I know what symptoms are serious and which ones are “normal”. This helps to give myself a little more slack. I was anxious about my first doctor’s appointment to get a confirmation of the little baby that was in there. But now, I’m trying to just take every day one at a time.

The Not so Good

I’ve read other third pregnancy accounts where moms have said that it was just flying by and they didn’t have time to even think about being pregnant.  Not having time is very true.  I am chasing two active toddlers around and it’s very difficult to only focus on being pregnant.  But I have been the sickest this pregnancy and that makes it really hard to forget I’m pregnant.

With my first, I maybe threw up once. I would always have crackers on my nightstand, and eat a couple in the morning before getting up. That worked beautifully. Same with my second pregnancy, a little nauseous in the morning but then it would go away. This time I threw up probably Every. Single. Morning for at least a month.  And then also many afternoons. The grand finale was having to tell a cab driver to pull over so I could get sick on the side of the road.  I always thought I’d be drunk and leaving the best party ever if that happened to me.  But no.  That was not the case.

So yeah, it’s hard to “forget” you are pregnant when that is happening. Especially when my oldest would  ask me every morning if I was going to throw up before we left the house. That’s how used to it he was.

The exhaustion is still very real.  I was staying up after the kids went to bed to work on my blog and other work I had.  That ended really quickly after I got pregnant. By the time we put them down, I was just sooo tired.  Also, there was a fear I’d get sick again if I stayed awake so it was just safer all around for me to go to sleep.

As I write this, I am officially 14 weeks tomorrow. I haven’t gotten sick in a week and I’m already feeling a little more energetic.  It feels good to be more productive again, because even if I try to remind myself that I am pregnant and it’s part of growing a human- the to do list doesn’t go away.

This is probably the hardest for me to write about.  But if you are in my inner circle at all, I wasn’t quiet about what I wanted. After two boys, I wanted a girl.  Actually I’ve wanted a girl from the beginning, but since this is planned to be our last baby- I really wanted a girl this time. The feeling was heightened and combined with pregnancy hormones.

My pregnancy being so different this time made me feel like I was maybe having a girl. They say you are sicker with girls, so of course! Also, everyone around me was convinced we were having a girl also.  I’ve realized now that’s a societal expectation- everyone will say you are having the opposite of what you already have.

I am 35 so had my genetics test done around 12 and 1/2 weeks.  They give you 7-10 days and call you with the results.  If you choose to find out, they’ll let you know the gender.  Of course I wanted to know.  They called me on day 7 and confirmed this baby was ALL MALE.

I cried. A lot. And you know what- I’m not going to say I feel guilty about it.  Because human beings are complex.

Emotions are complex.  You can feel differing emotions simultaneously.

I needed the space to mourn the idea of mothering a girl. It was an idea and a dream that I’ve wanted for so long and it was officially never going to happen. And it’s not just about frilly dresses, I wanted the experience of raising both genders and what it would be like for me- and my husband- to parent a girl.

Those feelings don’t mean that I wasn’t grateful for the little boy growing inside of me. Or grateful that I could have another healthy baby. Or happy that we were blessed with this family.  Because all of those feelings were still there.

Many women have these feelings and they feel guilty because gender can seem very petty and superficial in the grand scheme of things. And sure, maybe it is a little bit. While it may seem trivial, we all have dreams and vision of what our family will look like. Experiencing the loss of a dream are still valid feelings to work through.

I gave myself time to have those feelings and talk to my husband and family about it.  After two days, I was ready to move on. I read a few other posts about gender disappointment and it really helped me process my feelings and move past them. This is one of my favorites where she writes a letter to her daughter, saying goodbye to the vision she created of her.  I cried ugly tears reading this,  since I found it that first day and it really spoke to what I was feeling. As I read it again, this paragraph stuck with me and kind of created a basis of moving forward.

And because of that, it is with a tear filled face but excitement in my heart that today I say goodbye to the dream you were. You hold the dreams of my past and to hold on to you any longer takes moments away from my precious boys. At this point to want you here means one of them would not BE. And as I anxiously await the arrival our newest, and our last little I cannot imagine life without ANY of them. They are each so special to me and I love them beyond imagination. And you see, they deserve all of me, not just the broken pieces. And I deserve to have complete, whole happiness in each of them. From this point forward I am all in. They are each the dreams of my present, and the dreams of my future.

Dreams of our Future

I started to imagine what my family IS going to look like. And get excited for it. What my future has in store for me and my amazing little boys. While I have 3 sisters and 1 brother, I grew up with 2 sisters.  And I am close to both. We did so much together like choreograph dances, sing all the songs to Grease, play dress up– and we were truly a little tribe. My 3 boys can totally have that similar experience. Whatever that will look like for them.

There are so many benefits to having a 3rd boy- let’s not forget how much money we will save. I would have most definitely gone overboard on the girl stuff, clothes and all the things. I started to imagine this little baby boy and what he could be like and my love has only grown. And that doesn’t mean that the love wasn’t already there or that I want to replace him with a girl.

If you are having similar feelings, know that it won’t last forever. From what I’ve read, it’s lasted throughout the whole pregnancy for some, but right when they met their little baby- the feelings diminished.

My advice is to let yourself feel. When you feel guilty and suppress your emotions, you aren’t giving yourself the space to fully deal with them. Working through those thoughts lets you go to the other side. Where you start rejoicing and planning the family you were MEANT to have.

Here are my two boys announcing their baby brother. Aren’t they adorable??? It’s going to be pretty cool to see what this third little guy brings to the mix. 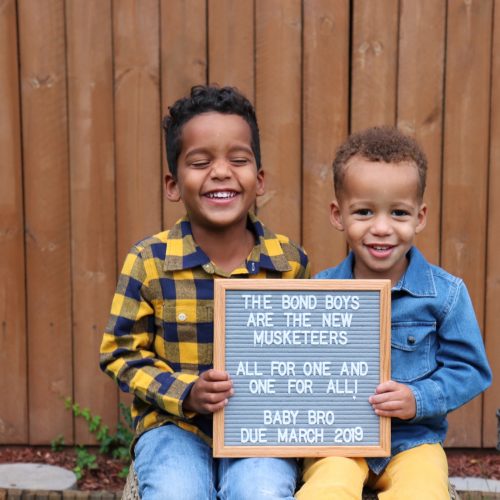